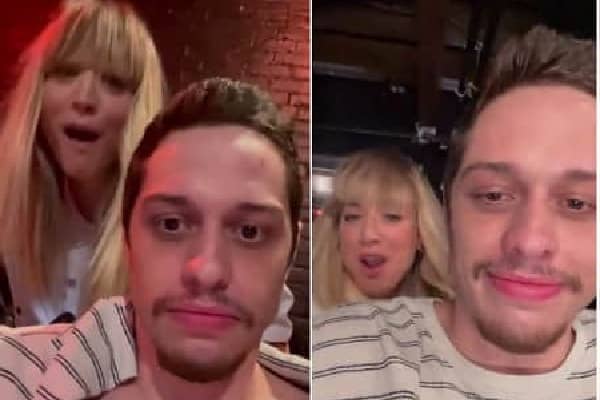 On the set of their new romantic comedy Meet Cute, Big Bang Theory star Kaley Cuoco and Saturday Night Live cast member Pete Davidson are getting along like a house on fire. For quite some time, rumors that the two would be starring in a new film had been circulating.

The rumors were confirmed on August 11 when the duo was seen filming in the Brooklyn area. Cuoco, dressed in a blue denim jacket and gray sweatpants, appeared disheveled, with unkempt hair. She had an abrasion on her cheek as well.

Davidson, on the other hand, was dressed in a striped sweater and green pants. In the midst of the photographers, the two were seen sharing a laugh. The movie’s cast was also seen walking together, and it appeared that they were getting along fine.

What We Know So Far About Upcoming Movie, ‘Meet Cute’

The new film from the team is essentially a rom-com with a dash of time travel. “Meet Cute is a deconstruction of the romantic comedy structured on the idea, What would you do if you could travel to your loved ones‘ past, heal their wounds, correct their problems, and transform them into the perfect partner?” according to Deadline.

Alex Lehmann directs the film, which was written by Noga Pnueli. The film’s premiere date has yet to be determined, but fans of the actors should not have to wait long.

Cuoco documented some behind-the-scenes shenanigans with her co-star for her Instagram stories less than a week ago. According to Cuoco’s stories, the co-stars had a good time on set.

Cuoco, who blasted the song “Higher Love” in the background in a series of humorous behind-the-scenes films, revealed in the comment that annoying Davidson while he was studying was her favorite hobby. While Davidson claimed he was merely learning his lines, she was seen dancing.

The actress later released a second BTS video of herself lip-syncing to Frozen’s “Let It Go,” revealing that Davidson despised her music choice, which just added to the enjoyment, and that she had played the song 300 times.

Davidson, who couldn’t keep a straight face the entire time, eventually busted out laughing. It appears that the two have a great rapport. Aside from goofing around on set, they also went on a day excursion to a Six Flags Amusement Park while filming, revealing that they had very diverse likes in attractions.

Cuoco shared many clips from their outing on social media. Cuoco and Davidson were attached to a slingshot ride in one video, ready to be catapulted upward. Davidson put pressure on the actress to join the tense ride, according to the actress.

She went on to say that if people listened closely, they could hear her shouting about how much she despises Davidson. The actors were thrown in the air in a second video as she shouted her anger for Davidson once more.