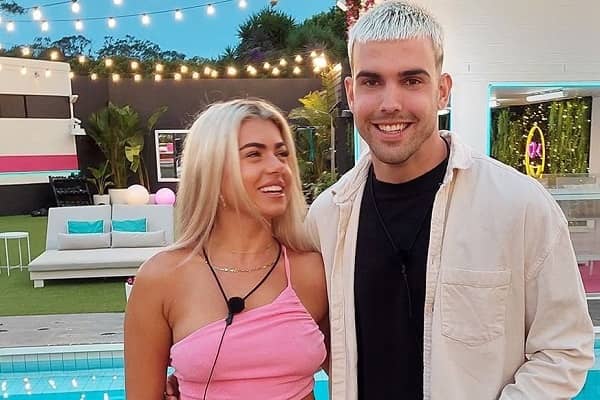 Aaron Waters and Jess Velkovski have ended their romance. After leaving the villa, where they had a tough stretch in the last weeks, the Love Island Australia couple separated up.

Both Velkovski and Waters rushed to social media to announce the breakup and to explain the circumstances with 9Entertainment.

In the interview, the reality star admitted that “we still had difficulty seeing eye to eye on a scenario in the Villa.” “I wanted to move on and thought we could at least learn from it, but there was no true growth, so I just decided it was best to part ways.”

Velkovski, meanwhile, responded to people’s questions about her relationship status with an Instagram statement.

The reality TV actress revealed that she and Waters were no longer together in an Instagram post, writing, “WE ARE UNFORTUNATELY NO LONGER TOGETHER. WE BOTH AGREE THAT IT IS IN OUR BEST INTEREST. THANK YOU FOR ALL OF YOUR LOVE AND SUPPORT [sic].”

Aaron Waters claims to have given it his all.

Waters also revealed in an interview with 9Entertainment that when he thought things weren’t reciprocated, he attempted to see things from Velkovski’s point of view. He also hinted that he could comprehend her at times, but that they couldn’t always get along.

He continued, “There was a lot of friction, a lot of stress.” I didn’t feel like I was getting anything in return. I felt like it was stopping us, and then when we got out of the villa, we spent some time together, and it kept coming up, and nothing seemed to be changing on her end, so I felt like it was dragging us down.

The Love Island contestant went on to say that he gave his relationship with Velkovski his all, but that he felt he could only do so much and that he needed to look after himself.

The Reason for Jess Velkovski and Aaron Waters’ Split

During the interview, Velkovski stated that she believes their problems after leaving the Love Island Australia villa were the main reason for their breakup.

According to her, once they departed the show, the two seldom saw each other.

Furthermore, she added that they disagreed on a lot of things, causing the relationship to be rocky. According to Velkovski, “We had a long phone chat, and then I messaged him and basically said, “It’s not really working.” He was completely in agreement with me.”

She went on to say that once she left the villa, she “didn’t feel like a priority” and “didn’t fit in anyplace” with her ex-future boyfriend’s plans. When questioned if the couple could reconcile in the future, Velkovski stated that it was a “clean break” and that she does not see them dating each other again.

At the moment, Velkovski and Waters aren’t following each other on social media, indicating that the two are genuine about their separation news.