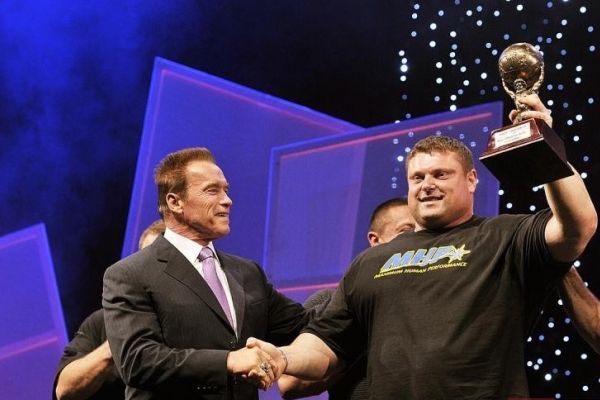 Powerlifting dates back to ancient Greece when incredible body strength was highly valued.

The World Strongman competition uses powerlifting rules to determine who is the strongest man in the world.

Many people in the strength game consider Ed Coan to be the greatest powerlifter of all time.

However, to find out who makes our list of the top ten greatest powerlifters of all time, let’s jump right into the article.

Even though Eddie Hall has retired, he remains popular among fans due to his television appearances.

In 2012 and 2013, he failed to qualify for World Strongest Man. However, for the next four years, he consistently finished in the top ten.

His previous best finish was third place in the 2016 edition.

In the same year, he set a deadlift world record at official events, lifting 500 kg at the World Deadlifts Championship (1,102 lbs).

Mikhail Koklyaev’s professional career began as a strongman. He finished third three times and second once in the Arnold Strongman Classic.

Similarly, in the ISFA Strongman World Championship, he finished third once and second twice.

He has won the Strongman Champions League multiple times. He has seven titles and several podia finish to his name.

Koklyaev won the WPC Raw European Championship in powerlifting in 2012.

Koklyaev later made his professional boxing debut in 2019. However, he was defeated by Alexnder Emelianenko via TKO.

Most people are familiar with Hafór Julius Björnsson from the HBO TV series Game of Thrones, where he played Gregor Clegane for five seasons.

Furthermore, in 2018, Björnsson became the first person to win the Arnold Strongman Classic, Europe Strongest Man, and World Strongest Man all in the same year.

He was a basketball player before beginning his professional acting and strongman career. However, at the age of 20, an ankle injury forced him to retire.

He began competing in a strongman competition in 2010. Later, from 2011 to 2020, he held the title of Iceland’s Strongest Man for ten years in a row.

He is also a four-time Giants Live winner and a five-time Europe Strongest Man champion.

Björnsson also holds the world deadlift record. In his Iceland gym in 2020, he deadlifted 501 kg (1,105 lbs) under strongman rules.

Andy Boltman began his powerlifting career in 1991 when he was 20 years old. He first competed in the BAWLA Yorkshire Junior Championship, a local powerlifting competition.

He later began competing in World Powerlifting Congress competitions. As a result, he is a three-time WPC Powerlifting champion and holds several WPC world records.

His total weight of 1273 kg/2806 lbs and squat weight of 550.5 kg/1213 lbs are both WPC records that have yet to be broken. In addition, his total squat records are third and fourth in their respective categories.

He is also listed in the Guinness Book of World Records as the first powerlifter to lift more than 1000 pounds. He is also a previous world deadlift record holder, having lifted 457.5kg/1008.6 lbs.

He finishes fifth in the 2002 Arnold Strongman Classic while competing in strongman competitions.

After graduating from college, Brian Shaw fell in love with strength. He used to be a college basketball player.

He began his professional strongman career in 2005 when he competed in the Denver Strongest Man competition.

Furthermore, he competed in the tournament despite having no formal training. Shaw was among professional strongman athletes within seven months.

In 2008, he competed in his first World Strongest Man competition. Since then, he has appeared in 13 finals, winning four of them.

Similarly, he has finished on the podium six times and in the top five 12 times. Shaw also holds the record for the most consecutive WSM appearances, with 14.

In the world of strength professionals, Paul Anderson is a true hero. Anderson began lifting weights when he joined the football team at Furman University.

Later, at the age of 20, he competed in his first powerlifting competition, breaking the official 30-year-old squat record with a squat of 650 pounds.

Anderson won a gold medal in weightlifting in the 90+ kg weight division at the Melbourne Olympics the following year. He also won the US Weighlifting Championships in 1955 and 1956.

Anderson entered the Guinness Book of World Records in 1957 after back lifting 2,840kg/ 6,270 lbs. It has been described as “the greatest human lift.”

He set 18 American and 8 World Records as a powerlifter. Furthermore, he retired undefeated.

Bill Kazmaier is a legend in the world of strength competitions. Furthermore, he dropped out of college to pursue his dream of becoming a powerlifter.

Kazmaier set a bench press world record of 663 pounds while winning the 1979 IDF World Powerlifting Championship at the age of 25. He won the title again in 1983, this time with a total weight of 2292 pounds.

He finished third in his first World Strongest Man competition in 1979. Later, from 1980 to 1982, he won three consecutive titles.

He retired with numerous records, but the majority of them have already been broken.

Mark Henry, aka Sexual Chocolate, is most likely the most well-known name on the list. He is a well-known figure in the World Wrestling Entertainment industry.

He has two WWE championships and one world heavyweight title. In addition, he was inducted into the WWE Hall of Fame in 2018.

He has also twice represented the United States in weightlifting at the Olympics. In addition, he won the Arnold Strongman Classic in 2002, scoring 25 points.

Zydrunas Savickas is widely considered to be the greatest strength athlete of all time. At the age of 17, he broke all Lithuanian powerlifting records.

He has won some incredible titles. For example, he is the 16th Lithuanian Strongest Man. Similarly, he has won the World Strongest Man title four times and finished second six times.

Although there are many legendary names in the strength world, one name stands out above all others: Ed Coan.

Nobody dominated powerlifting as much as he did, setting 71 official and 30 unofficial world records during his professional career.

Furthermore, he is one of the athletes who accepted doping as a part of the sport of powerlifting. Similarly, he is the lightest powerlifter to reach a total weight of 2,400 lbs.

Even after serving a lifetime ban due to doping C,oan is still considered a powerlifting legend. He was also inducted into the International Sports Hall of Fame in 2015.

Summary \sWhether you are interested in powerlifting or not, you must have seen these athletes on TV or on social media.

Many people may be confused about why bodybuilders are not listed. It’s because powerlifting is a way different sport.

Let us have a quick look at the summary of who makes our list of all-time greatest powerlifters.