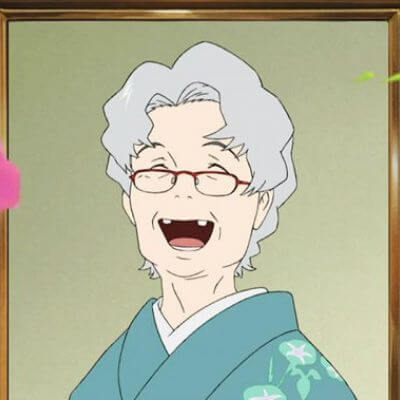 Grandmothers are often portrayed as sweet elderly women who enjoy caring for small children. They also make the best cookies, and if you ask, they may be able to teach you a useful home skill. Perhaps they act as a go-between for your parents and you.

Is that, however, all there is to say about grandmothers? Of course not, especially when it comes to anime grandmothers. So let’s see what kind of wonderful grandmothers we can find!

Assume you’re a computer genius in charge of vast cyberspace. Suddenly, reality hits you: a high school friend invites you to her great-birthday grandmother’s party in a small provincial town… She introduces you to her family as her fiancee! To top it off, there have been a slew of cyber-attacks launched. Are you perplexed? Not even our protagonist, Kenji Koiso.

The thing about Sakae, the famous great-grandmother, is that she uses her connections to help control the situation when cyber attacks wreak havoc in the real world. We can see how Sakae remained calm during the stressful ordeals, despite the fact that the cyber attacks disabled her heart monitor and caused her to die prematurely.

Sakae simply made some arrangements in the few hours she had left and asked Kenji to take care of the family. She also asks her family to re-incorporate the outcast Wabisuke, prompting the clan to band together to try to put an end to the Summer Wars. Throughout the film, she was a selfless and composed force of good.

Meet Ohana, the protagonist of Hanasaku Iroha’s story. She is the proprietor of Kissuisou, a Taisho period inn where Ohana is stationed. Sui Shijima is always dressed in kimonos and has a stern demeanor. Her posture and voice command obedience, despite the fact that her hair is short and fashionable.

We can expect Ohana, who is a straightforward girl with a strong sense of justice, to have a rocky relationship with her strict grandmother at first. Sui Shijima forced her to work in order to pay for her inn stay, and they conversed frequently.

Ohana wishes for some changes, but her grandmother is set in her ways. Sui Shijima, on the other hand, is concerned about her employees and believes that her granddaughter will be able to run the inn in the future. It’s just that Sui has a hard time expressing herself.

Mitsuha Miyamizu, one of the film’s protagonists, is the grandmother of this affable and plump woman. Hitoha is the spiritual leader of a sacred Shinto shrine in a small mountain town.

Mitsuha learns all of the responsibilities of a Miko from her, including how to make sake from spitted rice (that would be Kuchikamisake). Hitoha also demonstrates that she understands Kumihimo, a traditional Japanese braiding technique.

Mitsuha and her sister Yotsuha were raised by Hitoha after their mother died. Despite Mitsuha’s dislike for the traditional town and the responsibilities of a Miko, Hitoha makes every effort to make the experience meaningful for her.

She is always there for her granddaughter when she needs her! Hitoha is wise as well, as she tells Mitsuha (alluding to her encounters with Taki): “Treasure the experience.” When you wake up, your dreams fade away.”

Chihiro’s grandmother, Kazusa, is the protagonist. We were introduced to this elderly lady in an unusual manner. Kazusa enjoys chasing cats in the neighborhood park.

She tries everything she can to get close to them, but they always manage to get away. When Kazusa realizes Chihiro is watching her, she straightens up and tries to pass for the respected grandmother.

Kazusa didn’t get along with Chihiro’s mother or his uncle, so this relationship between grandmother and grandson is unusual. That is why she initially hides her true identity from Chihiro.

Chihiro, on the other hand, is not like the cats; despite the difficulties in the family relationships, he continues to get along with Kazusa. They used to meet in the park and have casual conversations about everyday life. As a result, we can assume Kazusa is a laid-back grandmother.

6. Marnie from Omoide no Marnie (When Marnie was there)

This charming film tells the story of Anna, an orphan girl who spends her summer vacation in an old seaside town. Marnie, a mysterious girl who appears and vanishes as if she were made of dreams, is discovered by her. Anna and Marnie will form a strong bond, while some friends assist the orphan girl in learning about her past.

Finally, Marnie reveals herself to be the spirit of Anna’s deceased grandmother, who shows her that she was deeply loved by her true family.

What do we make of a ghost grandmother who dresses up as a child? Every production by Studio Ghibli is a work of art, especially in the way the characters are depicted so naturally.

Throughout the film, Anna and Marnie are in love and yearn for each other. This unusual grandmother is an unforgettable character due to the freshness and innocence of their adventures, as well as the final moving revelation.

We have a fascinating grandmother here, with long hair and attractive features. However, a single glance at her face reveals that she rules with a cold, iron gaze.

Claire Skyheart is the Chief Operations Officer of the Central 47 division of New Tesla Corporation, which means she is in charge of a delicate operation to locate illegal devices. You’ve seen how technology can be abused, so someone needs to take action.

Claire Skyheart might come across as too cold if it weren’t for her interactions with her granddaughter Shiora, which are depicted in Dimension W. This lady is also incredibly intelligent. She’s an expert on espionage and knows how to elicit information from people (even from her innocent granddaughter).

She’s a badass for a lady who doesn’t have any unusual magical abilities!

Chi-Chi is probably the most well-known female character on the list. We first met her when she was a small child, and every Dragon Ball anime season brings us new information about her.

Chi-Chi is the princess of Fire Mountain and the protagonist Goku’s wife. She has two children with him (Gohan and Goten), and her first son will eventually have Pan, her granddaughter.

Chi-Chi is a tough warrior who is concerned about her family’s well-being throughout the Dragon Ball series. She is in her fifties in this scene and spends most of her time with Videl and Bulma. Nonetheless, Chi-Chi continues to keep a close eye on her two sons while being a little more laid-back with Pan.

Despite her desire for her granddaughter to be more girly, you know… The blood of the Saiyans always triumphs.

This elderly lady is Sasori of the Red Sand’s grandmother, but everyone who knows her refers to her as Honoured Grandmother. She is a venom and puppet expert from Sunagakure village. Chiyo has a reputation for being a badass.

She was a Shinobi in the Second Shinobi War, and she sealed Shukaku’s one-tailed tail inside Gaara. You can’t easily get past such a formidable grandmother.

Chiyo stepped away from the spotlight and spent her time relaxing with her brother and caring for her grandson Sasori. She taught him how to make puppets to help him cope with the loss of his parents.

Chiyo helped Sasori develop incredible ninjutsu skills. The only flaw in this grandmother’s character is that she chose to ignore Sasori’s warning signs of evil intent.

Meet Elder Nyon, the Kuja tribe’s former Empress. The Amazon Lily, an empire on Maiden Island, is home to this women-only tribe. They do, after all, have their own pirate crew, the Kuja Pirates! These women have been training since they were children to become tough warriors and adventurers.

Gloriosa spent her youth traveling the globe in search of a cure for her “love disease.” Gloriosa, unlike the other members of the tribe who died as a result of the illness, returned to the Island and became a wise Empress.

She also discovered and trained the Gorgon sisters, one of whom is the current Kuja Empress, Boa Hancock, who is regarded as the world’s most beautiful and powerful woman.

Despite her solitary lifestyle, Gloriosa is always by the Gorgon sisters’ side when they need her and serves as an adviser to Hancock. Despite the fact that their relationship isn’t ideal, they remain close. After all, they’re both powerful adventurers who cross oceans mostly populated by men!

Meet the Chinese Amazons’ leader, who lives near the Jusenkyo lakes! The people Cologne leads are extremely important in the Ranma 12 anime, as they have perfected many of the techniques that the characters learn.

Shampoo, her great-granddaughter, is in love with Ranma and follows him to Japan in order to kill him, but later discovers that he is male and forces him to marry her.

As a result, Cologne relocates to Japan and opens the Cat Cafe with Shampoo, a Chinese restaurant.

On this list, Cologne is the coolest and most powerful grandmother. She has a good sense of humour and enjoys watching the younger cast of Ranma go through battles and other comical situations. Despite her diminutive stature, Cologne is always full of sound advice and devious tricks for Shampoo and the others.

Cologne is an expert on Chinese herbs, cooking, and magical artifacts in addition to being a great martial artist. Look no further if you’re looking for everything that makes a great grandmother in a pocket-sized package! We’ve got Cologne!

You may also like to read Zachary Levi Age, Height, Weight, Net Worth 2021, Biography, Career 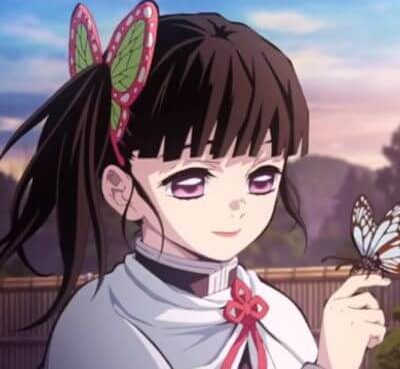 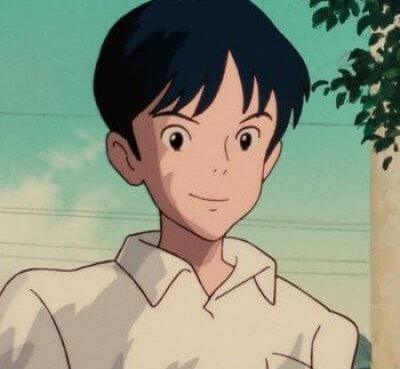 Seiji Amasawa, a violinist at the same school as Shizuku Tsukishima, is a character from Whisper of the Heart. He is a 14 to 15-year-old boy with a wide range of abilities. He spends his time in the
Read More 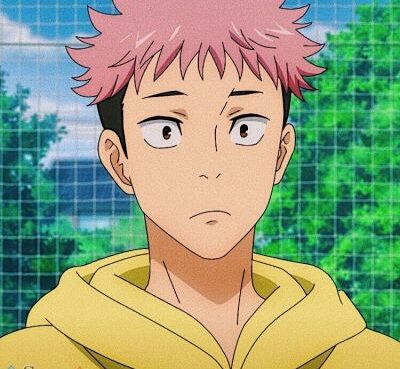 Who is Yuji Itadori? Yuji Itadori's Workout Routine: Yuji Itadori is an anime character who is the main protagonist of "Jujutsu Kaisen," one of the most popular anime series in 2021. It's even been c
Read More