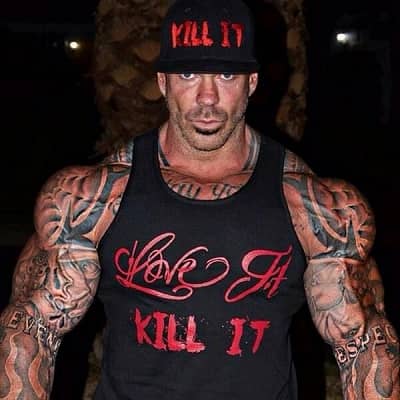 He had his own nutrition product line called Rich Piana: 5% Nutrition as a bodybuilder. He was also on anabolic steroids, synthetic growth hormones, and insulin, and he was well-known. These two elements contributed to the body he possessed, which he had when he was 18 years old.

“I usually listen to my body and train the body parts that I feel are strong for that particular day.”― Rich Piana

“I think the biggest mistake people make is not believing in themselves enough.”― Rich Piana

“Bodybuilding is not my main objective in life. It’s just something I do on the side.”― Rich Piana

“Real food shakes. Those are my favorite.”― Rich Piana

“There’s always a better way to do something.”― Rich Piana

“The truth is, for highly competitive bodybuilders, everyone eats the same – oatmeal, chicken, rice – and everyone cuts carbs out at night.”― Rich Piana

“My arms and chest were always the hardest for me. I obsessed over my arms for 32 years! I did everything to bring them up: for 2 years, I did mini arm workouts every night before bed!”― Rich Piana

“The problem I see with most contests is that the people judging have never competed in a bodybuilding contest. I feel that to have the knowledge necessary to judge a bodybuilding competition, you must have walked in those shoes.”― Rich Piana

“You should build yourself according to your own body and be comfortable.”― Rich Piana

“Since I train instinctively and listen to my body, I have no set routine. I very much train by feel.”― Rich Piana

“You need to be aware, educated, and willing to do whatever it takes to remain healthy and keep the body healthy.”― Rich Piana Roger the Dodger is the nickname of an American former professional football player, Roger Staubach. He was a quarterback for the Dallas Cowboys in the National Football League (NFL). Once
Read More Former American professional basketball player Allen Iverson. He participated in the National Basketball Association for 14 seasons in total (NBA). He participated there as a shooting guard and a poin
Read More In addition to playing tennis professionally, Ashleigh Barty is a well-known cricketer from Australia. She is also the second Australian to hold the world's top singles ranking in the Women's Tennis A
Read More