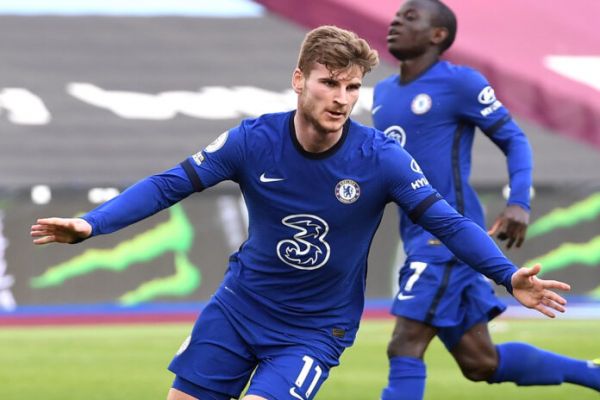 Every time two London clubs meet, whether, in the Premier League or elsewhere, there is drama.

In a thrilling derby match that produced some surprises, the Blues defeated the Hammers 1-0.

Timo Werner’s first season in the Premier League has been an emotional rollercoaster.

The young prodigy entered the league during a season that was filled with both happiness and sadness and shock.

Timo is one of the players who has struggled with goal drought and form during the Covid-filled season.

Werner has struggled to make an impact in his first season after joining R.B. Leipzig in Germany for $65 million.

In comparison to his previous season, the German forward has scored 11 goals in all competitions for Chelsea this season.

When he joined the club, expectations were high, but he has struggled to regain his confidence in scoring goals.

Apart from goals, he has the most combined goals and assists of any Chelsea player.

The game against West Ham is crucial for all Chelsea players, and Timo showed some signs of improvement.

Werner started and finished a move to end a close match.

After a move with Christian Pulisic, Ben Chilwell crossed the ball for Timo, who fired a well-placed shot. His sixth Premier League goal for Chelsea.

With this goal in mind. Timo has now ended his goal drought. He last scored for the Blues in February.

Timo Werner celebrates his first goal for Chelsea since February. (Image courtesy of Goal)
This goal, scored in the 42nd minute, just before halftime, proved crucial for Chelsea and their quest to finish in the top four of the Premier League.

VAR has been a contentious issue for many football fans around the world. Most of the time, the decisions made by the VAR referees have been contentious.

In their match against Chelsea, West Ham was the unfortunate team to face a ridiculous decision.

The Hammers were trailing by one goal and looking for a comeback, which looked likely.

Fabian Balbuena, a center-back, was sent off after his studs caught Chelsea left-back Ben Chilwell.

Every serious football fan understands that this should not have been a red card.

Because of this decision, the referees may face backlash from West Ham fans.

The home team attempted to make a comeback despite being reduced to ten men but was unable to do so due to a lack of players.

With this defeat, the Hammers are now three points behind Chelsea in fifth place and still have a chance to compete in European competitions next season.

David Moyes believes the referee’s decision to send Fabian off was “rubbish” and “made by somebody who has never played the game.”

Thomas Tuchel has been a key figure in the development and improvement of the Chelsea squad.

This Chelsea team has improved dramatically since taking over from Frank Lampard in the middle of the season.

With the victory over West Ham, Thomas Tuchel became the first Chelsea manager to go unbeaten in ten away games.

The German manager, 47, has yet to taste defeat on the road.

Chelsea has won eight and drawn two of its ten away games under Tuchel. They have scored fourteen goals, conceded only three, and kept seven clean sheets in these games.

What Does the Future Hold for the London Teams?

Chelsea is still in two other competitions: the Champions League and the F.A Cup.

The Blues will travel to Spain for the first leg of the Champions League Semi-Finals against Real Madrid.

The Blues, like West Ham, are competing for a place in the Champions League next season alongside West Ham, Leicester City, and Liverpool.

West Ham currently has no other competitions besides the Premier League, so their sole focus will be on finishing in the top four.

With five games remaining, David Moyes’ side is only three points behind Chelsea.

Chelsea will look to maintain their position in the Premier League’s top four while also competing in European and domestic cup competitions.