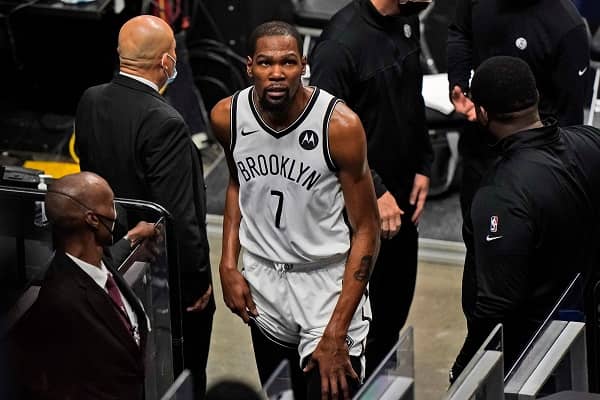 Kevin Durant was forced to leave the Nets-Heats game in the first quarter with an injury as his team went on to lose against the Miami team.

As he tangled with the Heats’ Trevor Ariza, he sustained a contusion on his left leg. In the first quarter, he was injured when driving to the basket for a layup.
Durant will be re-evaluated Monday morning, according to Nets coach Steve Nash. The re-evaluation decides whether or not further testing or imaging for the injury is needed.

“He’s sore,” Nash said. “But we don’t know how severe. We’ll see tomorrow how he wakes up and go from there.”

Nash said that he was working on a proposal for Durant to join the Nets in New Orleans. As Nash talked to the media, the medical staff in Brooklyn had not yet thoroughly examined him.

Kevin Durant came out of the locker room hoping to play the whole game for the Nets. His hopes were quickly dashed, however, when he was forced to leave the game early in the first quarter after becoming entangled with Ariza and suffering an injury to his left leg.
Before returning to the Nets locker room, Durant left the game and was checked by the trainer.

Durant left the game after scoring eight points and grabbing a rebound in just over four minutes. During the game, he made every shot from the field and has yet to miss.

“Any time one of our teammates goes down, any time something like that happens, it’s definitely going to take a hit for us,” Nets guard Kyrie Irving said. “And he’s just gotten back. We just pray that it’s not too serious and he’s able to recover, but it definitely has a hit on our continuity, at times.”

Durant has been plagued by injuries this season, and he only returned to the Nets on April 8th.

Durant, Harden, and Irving, the Nets’ Big Three, have only played seven games together this season. “We’ve had plenty of guys out of the lineup. Nothing new for us,” Nash said. After Sunday’s contest, Nets forward Jeff Green said, “while he hadn’t gotten a chance to talk to Durant.

He understands Durant is “disappointed” that it has happened so much in recent weeks, and that he “just wants to be out there playing. We really have to brace ourselves for what is going to be the next plans for when they finally come back,” Green said.

If it’s the last ten games of the regular season or the playoffs. So, when everybody’s healthy, that’s when we’ll look down the road and see what we got to go up against.”

Brooklyn Nets Vs Miami Heats- As It Happened!

The Brooklyn Nets faced the Miami Heat on Sunday, and the Heat won 119-117 at the buzzer.  Durant left the game with a left thigh contusion, which dealt a major blow to Brooklyn early on.

Despite the injury, the Nets held off the Heat until the final seconds of the game.  However, Heat center Bam Adebayo hit a game-winning buzzer-beater at the end to give the Heat a much-needed victory.
Both teams got off to a good start, with neither team allowing the other to gain a significant lead.

Miami took a one-point advantage over the Nets in the first quarter and extended it during the game.  At the end of the second period, the Heat’s one-point lead had grown to four points.

The Nets quickly recovered in the third quarter, cutting the Heat’s four-point lead to two points. The game got more competitive when they entered the fourth quarter when both teams were tied at 107-107. However, Bam Adebayo’s buzzer-beater gave the Heat the victory.

Bam Adebayo led the Heat with a double-double, scoring 21 points, 15 rebounds, and dishing out 5 assists in the game.  Goran Dragic had 18 points, eight rebounds, and seven assists, while Kendrick Nunn had 17 points. Trevor Ariza had 15 points, 9 rebounds, and an assist, while Duncan Robinson had 11 points and 9 rebounds.

Along with the buzzer-beater, Bam Adebayo held the Nets to 3-17 shooting as the primary defender today.

Kyrie Irving was 0-8 when guarded by Bam. pic.twitter.com/wySl1M1FWa

The Nets, on the other hand, were led by Landry Shamet, who scored 30 points, and Kyrie Irving, who had 20 points, four rebounds, and nine assists.
Similarly, Joe Harris had 12 points, while Jeff Green, Bruce Brown Jr., and Durant each had eight.