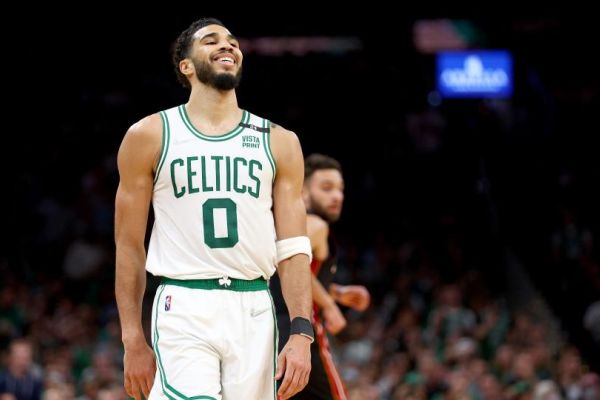 On Friday night, the Boston Celtics hosted the Brooklyn Nets at TD Garden for Game 3.

The Celtics entered their home court with two series losses, while the Nets had two wins.

THE NETS INTENDED TO WIN AGAIN TONIGHT, BUT JAYSON TATUM DESTROYED THEIR GOAL WITH A HUGE SCORING NIGHT.

In the game, he made history by becoming the third-youngest player in NBA history to score 50+ points in an NBA Playoffs game.

Despite their loss to the Celtics, Kevin Durant and James Harden both made history.

The Nets got off to a fast start in the first quarter.

For the Celtics, Kemba Walker opened the first quarter with a layup.

James Harden then responded with a bucket, resulting in a foul.

The Nets now have a one-point lead.

After that, Joe Harris hit a three-pointer for the Nets, extending their lead to four points about a minute into the quarter.

On the next possession, Harden drove straight to the basket, making a layup and a three-pointer.

THIS ALL LEAD TO A 19-2 RUN IN THE FIRST FOUR MINUTES OF THE GAME.

The Celtics finally broke the run when Jayson Tatum hit a jumper.

He then blocked Durant and scored a layup and a floater on the next possession, completing a 6-0 run by himself to bring the game within 9 points.

Marcus Smart then drove to the basket and sank a layup to cut the Nets’ lead to 7 points with 6:39 remaining in the quarter.

On the next possession, Harden responded with a step-back three-pointer before passing the ball to Durant for a jumper.

They were 24-14 halfway through the quarter, with the Nets leading by ten points.

Smart then drove straight to the basket, missed the shot, and was fouled, resulting in a three-point play.

Durant shoots a fadeaway over Tatum for another bucket and comes up with another, giving the Warriors an 11-point lead over the Celtics.

Smart responded with a three-pointer off Walker’s pass. Tyler Johnson then scored off of Durant’s pass.

In the first quarter, the Celtics took the lead.

Romeo Langford then hit a three-pointer from the other side, cutting the game to seven points with less than two minutes remaining in the quarter.

Tristan Thomson then follows up on Tatum’s assist with another bucket. Tatum stole the ball and converted a three-point play on the other end.

Smart then hits a three-pointer, sparking a 10-0 run that gives the team a point lead and ends the quarter 33-32.

In the second quarter, the Celtics maintained their lead.

At the start of the second quarter, the score was 32-35, with the Celtics extending their lead with a bucket. Harden’s subsequent lob to Claxton resulted in a bucket for the Nets.

Tatum missed a shot, but Thompson recovered and made up for it with a bucket.

On the next possession, he hit a step-back three-pointer over Claxton, giving the Celtics a six-point lead over the Nets.

Tyler Johnson followed with a three-pointer on the other end.

Langford responded with his three-pointer. Harris then made a layup.

Thompson faked a shot and then dropped a bucket. Following that, Evan Fournier https://playersbio.com/evan-fournier/?swcfpc=1 On Langford’s pass, he hit a turnaround jumper.

Harden then made an easy layup, and Kyrie hit a jumper to cut the Celtics’ lead to four points.

Durant then hit a jumper to close the gap to two points with five minutes remaining.

Fournier responded with a three-pointer, and Durant hit a jumper on the other end.

Blake Griffin responded with a layup after Tatum hit a three-pointer.

Grant Williams blocked Harden’s shot on the other end, while Fournier made a step-back jumper.

As a result, Tatum gets another offensive rebound, and the Celtics take a 10-point lead with about two minutes remaining in the quarter.

Durant hit a three-pointer, and Thompson followed with another on Fournier’s miss.

The quarter ended with the Celtics leading 57-61.

The Celtics maintained their lead in the third quarter.

Tatum continued his hot shooting with a three-pointer to begin the third quarter.

Smart stole the ball and found Thompson on the other end for a dunk. As a result, the Celtics took a 10-point lead less than two minutes into the third quarter.

Durant responded with a three-pointer.

With 9:39 left in the quarter, the score was 60-69. When Durant missed a three-pointer, Kyrie quickly capitalized with a basket.

Harden later found Durant for a bucket. Tatum then devised a turnaround jumper.

Durant made a three-point shot, and Irving followed with a jumper.

This gave the Nets a one-point advantage over the Celtics halfway through the quarter.

Smart then hit a three-pointer off Tatum’s assist to reclaim the lead.

Smart then made it a four-point play by hitting a three-pointer and drawing a foul.

Durant hit a jumper, and Smart responded with a three-pointer.

With 2:16 left in the quarter, Fournier hit a wide-open corner three to extend his lead to 11 points.

Tatum was then called for a foul and a bucket.

With less than two minutes remaining in the third quarter, the Nets trailed the Celtics 79-91.

On the next possession, Tatum hit another three-pointer. He followed that with a two-pointer.

While Harden responded with a three-pointer. Irving then hit a jumper with less than 10 seconds remaining.

The quarter ended with the Celtics leading 84-96.

The Celtics eventually prevail in the fourth quarter.

On the next possession, Thompson made a layup. He then slammed a dunk on Walker’s missed shot.

Walker then made a jumper, and Harden followed with a three-pointer.

Kyrie hit a long three-point shot. Tatum threw down a jumper on the other side.

But Irving responded with another three-pointer.

Tatum made a layup, Fournier hit a three-pointer, and Walker finished with a jumper.

With about three minutes left in the quarter, the Nets trailed the Celtics 106-116.

Smart’s jumper increased the lead to 12 points. James Harden followed with a three-pointer.

While Tatum beat Durant with a jumper.

They were 116-123 when Durant hit a three-pointer to cut the Celtics’ lead to four points.

With 13 seconds left, Williams slammed a dunk off Fournier’s pass.

Jayson Tatum’s historic performance propels the Celtics past the Nets in Game 3.

When the Celtics took the court against the Nets on Friday night, they had two losses under their belt.

What appeared to be another win for the Nets’ big three was shattered by a historic night from Celtics star Jayson Tatum.

Tatum had one of the best scoring nights in NBA history, not just for his career.

He had a playoff career-high 50 points, six rebounds, and seven assists.

“Just one of those nights,” Tatum explained. “I had a tough shooting night in the first game, and I didn’t get much of a chance to play in the last game because I got poked in the eye.”

He is also the third-youngest player in NBA history to score 50 or more points in a postseason game.

“A lot of guys stepped up tonight around Jayson being special,” said Boston coach Brad Stevens.

After struggling in the previous two playoff games, this was a fantastic night.

Tatum struggled to make an impact in the Celtics’ last two playoff games, in which they lost, but playing on their home court gave him an advantage.

“There’s nothing like playing in front of your fans,” Jayson said.

Marcus Smart, a teammate, stated, “He was just mentally locked in.” “We’re facing a juggernaut of a team.” As I previously stated, the world and we are both aware of it. It will not be simple. You can’t sit down or take a step back. You have to be able to push forward, which is exactly what we did tonight.”

Other Celtics players, besides Tatum, contributed significantly to the team’s victory.

Tristan Thompson was all over the court, scoring 19 points and grabbing 13 rebounds.

James Harden and Kevin Durant had a historic night.

James Harden, on the other hand, led the Nets with a double-double of 41 points and 10 assists, as well as 7 rebounds.

Kevin Durant led the way with 39 points, 9 rebounds, and an assist.

Despite the loss, both Net’s players made history. They are the first Nets teammates to score 30 points or more in a playoff game since 2006.

Meanwhile, former Celtics player Kyrie Irving dropped 16 points, 6 rebounds, and 2 assists despite being booed every time he touched the ball.

He was booed even before the game, during warmups and introductions, but he still played for his teams.

However, things took a turn for the worse when a few fans began a vulgar chant directed at Irving.

“This is basketball.” “I’ve been in a few different environments in my life,” Irving explained. “As I said, as long as it’s just the nature of basketball out there and nothing else, I’m fine with it.”

Both teams will now meet again on Monday at TD Garden for Game 4.