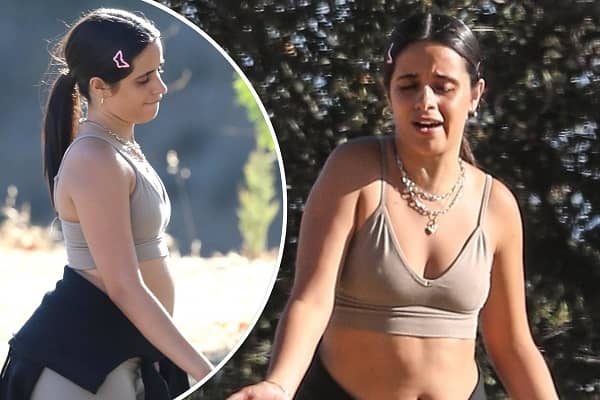 Camila Cabello is unafraid of her large stomach, weight gain, or any other physical flaws. The renowned Cuban-born American singer-songwriter has been outspoken in her support for an unfiltered view of young women’s bodies, opposing “fatphobic” beauty standards.

She’s been promoting her message of unabashed body positivity loudly and proudly. For example, on July 16 of this year, she turned to TikTok to discuss the subject, explaining her self-consciousness over what she was wearing and how her body would be regarded.

Cabello remarked in the video, revealing her sports bra and stomach, “I’m wearing a shirt that displays my tummy, and I wasn’t tucking it in.” “Because I was going around and acting like a normal person who didn’t always tuck it in. And I thought to myself, “Damn,” but then I reminded myself that fighting your body is so last season.”

Continue reading to learn about previous times the Cinderella star has spoken out about body positivity and how it has influenced her boyfriend, Shawn Mendes.

After coming across body-shaming reports about herself on the internet, the ‘Havana’ singer delivered inspiring messages of body positivity on her Instagram stories in 2019.

She added in her memoirs that the articles and social media posts containing her photos made her feel “very uneasy” at first. She felt awful at first for not tucking her stomach in for the snaps. She stated, however, that she later consoled herself, saying,

Of course, there are awful photographs and horrible angles, and my body isn’t made of [expletive] rock or pure muscle, but the worst part about young girls growing up in an airbrushed society is that they seek perfection that isn’t genuine.

She also stated that our society, particularly for women, had yet to embrace weight increase and had a wholly unrealistic vision of a woman’s body. She claimed that having “cellulite” or “fat” on a girl’s body was normal and that it was still attractive and natural.

Cabello also revealed that she gained weight after being exposed to COVID-19 when she appeared on The Late Late Show with James Corden in August 2021, talking about the aforementioned TikTok video.

And, because she was aware of how paparazzi would sell her photos to the media, she felt compelled to speak up about it. The singer also stated that her weight might fluctuate, but that no one need be concerned.

Inspired by Camila Cabello Her Companion Shawn Mendes Mendes is without a doubt one of the most in-demand musicians in recent memory, which puts a lot of pressure on him to live up to people’s expectations. As a result, the Canadian singer stated in an interview with GQ in November 2020 that he had a difficult time.

On the other side, seeing his boyfriend, Cabello, struggle hard against people and the media inspired him to believe that he, too, could overcome his challenges.

“”She’s so powerful, so clear and confident with her [body], and she’s so eloquent and sensitive about other people’s,” he said of Cabello. It had a significant impact on my life.”

That’s why partners exist: to assist, inspire, and grow together. All the best to the couple!