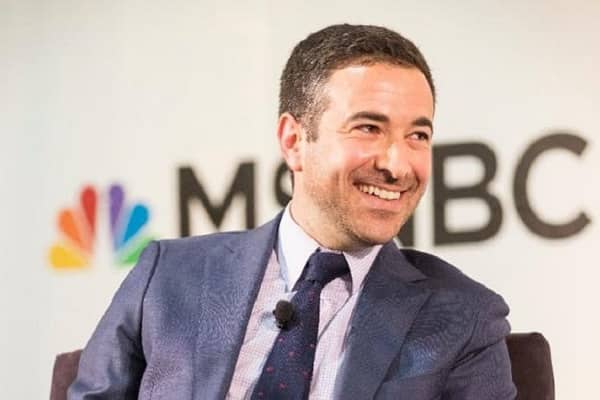 Ari Melber‘s grandparents were survivors of the Holocaust. Ari Melber is a journalist, writer, and attorney who is best known for hosting The Beat with Ari Melber, an Emmy Award-winning show. He is also MSNBC’s lead legal correspondent and an NBC News legal commentator.

He focuses on law and justice stories including the Justice Department, the FBI, and the Supreme Court. While his profession and career are well-known, many people are unaware of his ethnic origins and nationality.

Melber is an American Jew who was born in Seattle to an Israeli father. He is a citizen of the United States of America.

Read more Meet The Husband Of Jacelyn Reeves – Private Bell And Their Relationship!

During the 2000s, he contributed several essays to the Jewish weekly The Forward. Even in 2019, he posted a newspaper-created meme. Melber’s parents tied the knot in 1967. Daniel, his father, is a retired neurologist, and Barbara, his mother, is a retired sociologist. Jonathan is his younger brother.

What did he do before Journalism?

Melber is the grandson of Holocaust survivors, in addition to having Israeli connections.

Melber’s father, according to a 2019 interview with Jewish Rhode Island, wanted him to grow up like an American. He was well aware that as a member of the diaspora community, he was in the minority. That understanding enabled him to recognize and empathize with other minorities.

Melber is passionate about politics even when he is not working. His social media feeds are brimming with news and concerns, particularly concerning American politics.

So if you ever watch The Beat, thank you for making it:

The most watched cable news show three months in a row at 6pm! ??

And *thanks* to the whole team reporting the news amidst the conditions of 2020 and 2021 — and hopefully a bit different by 2022… pic.twitter.com/U6ERYpUnZi

He opposed Donald Trump’s statement about delaying the vote count in the 2020 presidential election through tweets in November 2020. Melber underlined over and over how the president’s boasts about winning the election were untrue, and how this was a major issue. He criticized the republican parties’ attempt to overturn the election in December 2020. Their attempts to disregard the undeniable loss, he said, could not be normalized.

Read about All You Need To Know About Polo G’s Son With Crystal Blease – Tremani!