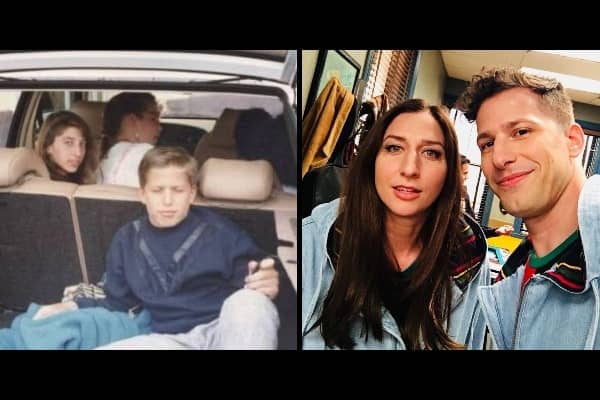 Despite his casual and frequently juvenile demeanor, Samberg as Peralta is an investigator with a high percentage of solved cases.

Peretti, on the other side, played Linetti, a snarky and domineering civilian administrator who despised her job, arranged her life around social media, and set her sights on dance as a career.

That pretty much sums up the type of fun they provided when they shared the screen. That’s why the two are frequently referred to as the most crucial pieces of the puzzle in terms of the show’s success.

However, their fantastic on-screen chemistry can be explained by the fact that they were childhood friends. Yes, it is correct. Since elementary school, Samberg and Peretti have been pals.

After surfacing on Reddit a few years ago, a photo of the two shot, while they were in sixth grade, went viral on the internet.

In the photo, Samberg sat in the trunk with his eyes closed, while Peretti sat in the back passenger seat, staring straight into the lens. The couple was accompanied by their family members, who were seen in the photo.

A user commented on the Reddit thread, “They should work this photo some way into the show, and bring back an episode where it’s just Jake and Gina reminiscing about their youth.” “I’m so thrilled they’re truly close friends IRL,” said another.

The Elementary School Story of Andy Samberg and Chelsea Peretti

The real-life pals met in primary school in the Bay Area, where they became fast friends. Given Samberg’s superb looks, Peretti even acknowledged having a crush on him in a September 2014 interview with Conan O’Brien.

“Andy was a major crush of mine, but he refuses to admit it for some reason. When I bring it up, he just stares at me blankly “she stated

Despite being friends throughout high school, their friendship never progressed into a sexual one. Instead, they were ordinary pals, with her calling his house using “old-fashioned phones” and hanging up as soon as the phone rung.

She also admitted to O’Brien that there was no internet chatting or emoticons to help her flirt with him back then, and that she didn’t know what her end game with Samberg was.

The Exit of Chelsea Peretti from ‘Brooklyn Nine-Nine’

The on-screen chemistry between Samberg and Peretti ended when Peretti left the show after the sixth season. In 2018, she confirmed the news on Twitter, writing, “In Season 6, I won’t be performing a full season of Brooklyn Nine Nine. But that doesn’t rule out the possibility of my return.”

She also expressed her gratitude to the audience for spending hours watching her play Linetti, describing her role as confident, idiotic-but-smart, witty, and laced with rhythm and cell-phone radiation.

Later, Samberg declared publicly that he admired her decision to leave to pursue stand-up comedy again. “She and I have a long history together, so it was one of those difficult but all-love decisions,” he added.